‘I Was Overwhelmed’: Tessenderlo Kerley Meets Needs of Kids Headed Back to School

Deborah Griffin recently moved from Houston to Dumas, Texas, to take over as executive director of the Care Net Pregnancy Resource Center of Dumas.

On her first day in her new role, she met Charles Pendleton, manager of Tessenderlo Kerley’s Dumas plant, who asked her what she and Care Net needed.

“He just came in and said he wanted to make a donation,” Griffin said. “When I saw how much he gave, I was overwhelmed.”

Care Net does much more than provide resources to pregnant women, and in July and August, it hosted back-to-school events for elementary and junior high school children who come from low-income homes. Tessenderlo Kerley donated $1,000 to those events, helping provide new backpacks and other much-needed school supplies for nearly 800 children in and around Dumas.

“The people at the Tessenderlo Kerley plants understand the true meaning of the word ‘community,’” said Tessenderlo Kerley Executive Vice President Russell Sides. “Providing so many kids with needed supplies and letting them know they’re valued is a key component to building up communities we serve.”

During each back-to-school event hosted by Care Net, kids were able to choose from dozens of backpack designs, as well as pencils, markers, stationary, notebooks and other brand-new supplies. Police officers, firefighters and first responders accompanied the kids as they made their choices. 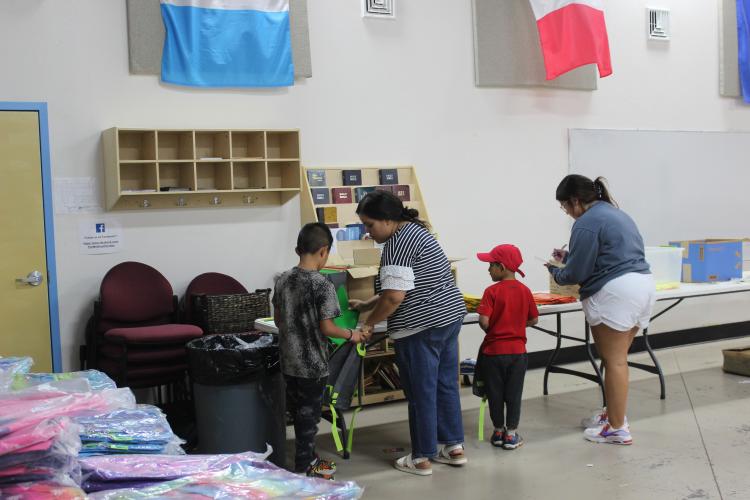 “I was able to watch these kids who were maybe never around police officers or first responders and be escorted around by them. They took them around the room and treated them like one of their own,” Pendleton said.

“We want them to feel valued and let them know they’re just as worthy, whether they have the income or not, to have cool stuff and to start the school year with new things like they would if they were part of a family that did not face financial challenges,” Griffin said. “The way that the community has shown up for these kids is amazing. It’s been spectacular to see.”

For Griffin, who’s still adjusting after moving from a large city to a town of just 15,000, it’s fantastic to know that the Tessenderlo Kerley team will be there to help her and Care Net continue to care for young people in the community.

“I’ve felt very welcomed by them,” she said. “They’re always calling and asking what they can do, how much more we need, and that’s incredible.”